Every time I am forced, through life’s exigencies, to enter a Walmart, I relive the many reasons why I hate Walmart.  I object to the store and to the corporation on every level: physical, emotional, political, and cultural.  Which begs the question: why am I heading once again into a Walmart when no one is apparently holding a gun to my head?  The short answer is that I am a spoiled, impatient American.  The long answer involves excuses and rationalizations, which I’m happy to offer here.

First of all I only go to Walmart under duress.  I’ve been in the Walmart in my hometown less than 5 times in my life and all of them were traumatic.  Even before I knew about Walmart’s off shore activities, poor treatment of employees, and imperialistic business plan, I hated the store.  I hated the aisles that aren’t quite wide enough, the shelves that look like they’ve been through a minor earthquake, and the way you can only get to some departments by going through several others, creating a “forced march” feeling.  An uncommunicative pre-teen and desperation led me to Walmart the first time.  My son told me the day of the evening choir concert that he needed a white shirt.  After scouring Penney’s, Sears, Target, and K-Mart, I called a friend in desperation and she said, “Go to Walmart-duh.”

There it was—a wall of white button down shirts for the young, the slim, and the under-dressed.  As I roared by the women’s clothing I spotted a red zip-up sweater with a black, fake fur collar for $12.99.  Yes, Reader, I bought it.  And I still have it 12 years later hanging guiltily in my closet, ready to wear every Christmas season, looking as good as the day I bought it—and why not, there isn’t an ounce of anything that occurs in nature in that sweater.  I have been to my local Walmart two additional times: once to purchase school supplies for students who cannot afford to buy their own and once to buy a going away present of cute office supplies for an employee who abruptly quit working in my office to take a similar job in her hometown.  I don’t regret the school supplies, but when I decided that I really didn’t want to give a present to someone who had left our office in the lurch, I gave the items to a friend to return and keep the money herself because as I told her, “I will never go into that store again.” And I haven’t.

Fast forward to retirement and cross country travel where sometimes Walmart is the only option.   Just before leaving my sister’s home in Maryland, I mentioned how uncomfortable certain undergarments (okay, my bra) become after several hours in a car.  She let me try on a comfort bra of hers (I can’t remember the name, but it didn’t push up or enhance anything) and I wanted a couple of my own.  What was the source of this comfortable
alternative? Ordering it during one of those “As seen on TV” ads or going to Walmart.  So I went.

On the same trip, my husband suddenly realized he had left the white short-sleeved shirt he wears under sweaters somewhere in Tennessee, so we needed to buy a new one.  No big deal.  Except in Santa Fe, the only choices are boutiques (white shirt $400) or Walmart.  I am not kidding.  The nearest Macys or Target is 80 miles away.  I don’t know if it’s because the stars have homes there (Julia Roberts to name one), but there is really no shopping that isn’t outrageously expensive.  I don’t doubt that the white shirt in the men’s boutique would have been the white shirt of Mike’s life, but come on.  So off we went to Walmart where we actually did not find a short-sleeved, white shirt, this being November and even Walmart observes the seasons.

I hadn’t had to face a Walmart in more than 15 months, but all that changed recently as Mike and I traveled across Texas on our way to Houston. Western Texas may well be the spiritual center of all that is Walmart.  It is ugly, dry, desolate, unwelcoming country.  No one seems happy to be there.  Sound familiar? Somewhere between Van Horn, TX, where we actually had bad Tex-Mex food and an Egg McMuffin that will put me off eggs for another 30 years, and San Antonio, where everything changes and the terrain starts looking like people live there, I voluntarily went into a Walmart.  The proof is in the pictures below taken by my talented husband, otherwise known as the thumb.  For a couple of years I have been trying to learn how to crochet with limited success, my main problem being that I can’t keep the yarn tension consistent so there’s a waviness to my rows that isn’t lovely.  Somewhere in Texas I found on my iPad an online source for easy patterns that included demonstration video.  Armed with new skills and a whole bunch of yarn that I optimistically brought from home, I wanted to buy a new crochet hook.  That meant Walmart as there is no other place on Route 10 until El Paso.

It was a typical Walmart experience.  The crochet supplies were hidden in an obscure row next to the automotive section.  I asked three people (all of whom wore red tops and some kind of name tag) for help: they claimed not to work for Walmart.  Okay…  The crochet supplies themselves were unlabeled and old.  When is the last time you saw something priced in cents?  I did find a hook that was labeled “I.”   It might have been an “i” or an “L,” which is what I needed. I went with it.  There were 9 checkout stands; 2 had checkers.  On my way to the one at the end for 10 items or less (shouldn’t it be “fewer”?), I crossed in front of a man who didn’t seem to be in line but apparently was if his enraged gasp was any indication.  I stood in line for a while and then a new checker announced that she was opening another line.  She looked at me as she said this but I didn’t grasp her message quickly enough and 4 other customers, ones that were behind me moved into the new line.  I was able to be philosophical as opposed to homicidal because by this time there was only one person in front me.  One person, that I now noted, had way more than 10 items.  Not to worry, though, she was doing 3 transactions of 10 items each.

All of this brings me to my observation about what Walmart apparently does to its employees and its customers.  I think many perfectly nice people enter the store, but after the trauma of fighting through the aisles, trying to decipher what the signs really mean, seeing products that they paid a lot more for in other stores and feeling the rage/chagrin that comes with paying too much plus listening to the worst music ever played (the Mormon Tabernacle Choir’s farm team singing “Satisfaction”), the average person goes to the dark side.  This includes behaviors like snarling at perfectly nice women who pass in front of you saying “excuse me” while you wait in line.  Just saying.

What Walmart does to its underpaid employees must be worse.  Each cashier has clearly just lost a beloved pet a half hour before having to punch in at work.  This manifests itself in mournful sighs, slow motion ringing up, occasional lifeless inquiries (“Did you find everything you wanted?” “No! I’m in Walmart for God’s sake.”), and a genetic inability to open the paper thin plastic bags supplied by corporate.   Before you have picked up your items the cashier has already turned her deadened gaze onto the next hapless customer.  I know my Walmart experience hasn’t been extensive (Thank God) but there is a quality of Hotel California hopelessness that emanates from the store.  By the way, I have never experienced a greeter and I think I’m happy about that.  From what I understand this is a manic and friendly person who is apparently on a lot better drugs than the cashiers. 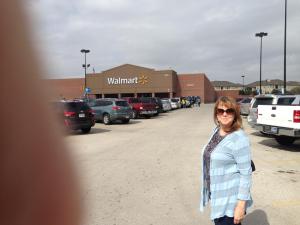 7 thoughts on “All Roads Lead to Walmart”