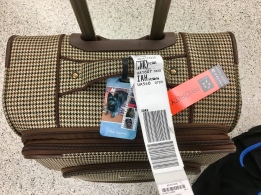 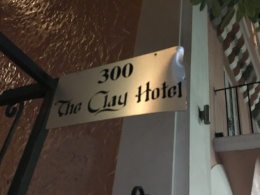 Have you ever seen the “Friends” episode where Rachel is a bridesmaid and walks down the aisle with the back of her dress caught in her underwear? Of course she pulls it off (not literally) and ends up singing “Copacabana” or something like that with the band.

Yesterday in the lounge of the United Club (Houston airport) a man walked up to me and turned me around and pulled a piece of toilet paper out of the waistband of my jeans. A short piece, okay? He seemed to feel an embrace was in order but I wasn’t in the mood and I wasn’t that grateful. The man looked familiar, kind of like Kris Kristofferson. If it was you, Kris, I apologize. I’m slightly too young to have been your fan but still I may have let you hug me. Or not.

The man seemed sad or wistful or something new age-ish (he may have had braids) and backed away from me with his hands in the whoa! position. I said something about needing to blow my nose, which made absolutely no sense and he kind of snorted as if to say “I know that’s not why the toilet paper was hanging out of the butt side of your jeans.”

It kind of was. I went to the bathroom for the usual reason but also to get some tissue or toilet paper for the nosebleed I could feel coming. Did I store that paper in my waistband? No, obviously. But I did connect the events and shared the information in my usual stream-of-consciousness style. All of this makes me think about how one’s communication style may lead people to stop listening.

I don’t know when I began starting conversations in the middle, as opposed to the beginning where it would make sense. I have enough friends who can pick up the conversational ball, as it were, and fill in the blanks. This is not a skill my husband shares. He often looks at me blankly and says “I have no idea what you’re talking about.” Kind of unfair because I can fill in the blanks for him. In fact, when we travel, I am his unofficial interpreter. I know exactly when and where this started: Madrid 2008.

I don’t speak Spanish. I should because I was fluent from age 2-6 when we lived in Spain. For a long time I had a wish/fantasy that if I went to Spain I would understand the language—it would all come back to me. Not so; in fact 4 years of high school French (also forgotten) actually interfered with my pronunciation of similar Spanish words. I had to overcome my lack of language skills quickly because when Mike leaves the U.S. and in some cases, California, he loses about half of his ability to hear and talk.

Mike is the opposite of the Ugly American. He is culturally sensitive and never verbally demanding or deliberately confusing. This translates into a particular way of communicating in Spanish, which he studied in college and where he achieved about as much fluency as I have in French. He repeats himself. But not at the end of a thought or after a response. No, Mike chooses a word or phrase to repeat a few times when asking a question. People don’t get that.

The problem became obvious when I stood by and listened to Mike and the very nice and extremely patient concierge (Alejandro) at our little Madrid hotel try to understand each other. Mike asked about getting a massage (not from the concierge but at the spa we had passed). There was something about bringing your own towel which we were told in English, the concierge being a typically multi-lingual European. Mike asked for directions (in Spanish) but he repeated the phrase for where is (donde es) several times. Alejandro looked at Mike blankly so Mike threw in a couple more donde es’s. At this point I’d had enough and I asked Mike’s question without all of repetitions, which Alejandro understood. And so I became the interpreter. Mind you, all I did was repeat what Mike said and sometimes I didn’t even know what it meant, but it worked. Little did I know that this role would be permanent and employed by Mike even in English speaking countries.

In Mike’s defense, he doesn’t do well with accents. Early in our relationship we saw “Emma” and Mike did not find the upper class English vernacular easy to understand. After about twenty minutes of Mike asking what they said and me whispering the American English version, I looked at him and hissed, “It’s your language!” After that he didn’t ask and I took Shakespeare off the list of plays we would see together. The embargo on interpretation of people speaking English lasted until we went to Scotland.

As a devoted Anglophile I’ve always read literature and novels set in England, Ireland and Scotland so I have some familiarity with the vocabulary and slang. Probably my favorite feature of electronic readers is the way you can look up anything by holding your finger on the word. That’s how I found out what Jaffa cakes and court shoes were. Look it up. Anyway, when we landed in Edinburgh, pronounced Edinburrrrr or something like that, we headed out to the taxi queue. Our driver epitomized the laconic Scotsman and uttered a total of three words, “What’re you after?” Mike turned to me with a look I can only describe as desperate. Luckily I’ve read a lot of Denise Mina and was able to reply, with equal terseness, “the George.” And that was it: he drove us to the George Hotel and when I asked him how much he pointed to the meter. None of those unnecessary, extra words.

My interpretive skills continued to be utilized throughout Scotland and south to Bath and London. Mike was best with people who spoke English as a second language. Go figure. Maybe they spoke more slowly? I was actually okay with the interpretive role in the UK because I love Brit lit and I found out not long ago that more than half of my DNA is British and Irish. So, on a molecular level, I was connecting with my people.

If only interpreting for Mike were limited to foreign soil. There are many places in this country where folks have specific and (maybe) difficult to understand accents. Maybe. I feel if you’ve ever watched American television you’ve been exposed to southern drawls, mid-west twangs and the interesting “a’s” of New England. But, come on, people, we’ve had a president from Massachusetts and another one from Georgia, not to mention Matthew McConaughey at all times. BTW, did you know that you can identify dialect in the United States by how people pronounce their “a’s?” But I digress.

Last night we arrived in Miami and I may have been a little impatient what with the toilet paper incident and flight delays. So when the nice young man at the desk gave us information, talked about the amenities and asked a couple of questions, I didn’t help either Mike or Joel (pronounced jo-elle). Nope, I let them talk and talk and not understand each other and acted like I was in my own little world. Of course I’ve paid the price. No sooner did we close the door of our room than Mike turned to me and said, “Did you get any of that?” Sigh.