Chateau de Chenonceau on the way to Blois, which by the way is pronounced bi-lwah, not blah as Wil from Bayeux told us….

This was hands down our favorite castle on this trip. As beautiful as the castles in Scotland, England, and the rest of France were, this one with its gorgeous gardens and tapestries has been lovingly preserved since Henry II offered it to his mistress Diane de Poitiers in 1547. One of the few chateaus built on a river, the castle has had many lives: it has been the home of a royal mistress followed by his royal wife Catherine de Medici (who kicked out the mistress and immediately redecorated), the home of many queens including Mary, Queen of Scots, the property of a rich family of chocolatiers, a hospital for the wounded during WW I, And an escape path from the occupied Nazi zone to the free zone across the Loire River during WW II. The vast gardens supply flowers for every room in the castle including a chapel that has sanctimonious graffiti scratched into a wall by a crusader. One of the things that made this such a pleasant visit was that the sheer size of the castle and grounds kept the crowds smaller and it was possible to take in the environment at your own pace.

After our side trip to Chenonceau, we drove to Blois and checked into an auberge built in the 1600s with the smallest rooms of our trip so far. This town, also on the Loire River, was charming but for us a stopover on our way to Beaune the next day, we had a great Moroccan dinner, a nice change from French cuisine. Like every meal we’ve had in France, it was accompanied by a basket of cut up baguettes. No matter how many carbs in your meal (e.g., a hamburger and fries) bread will automatically be brought to the table. This made all of us wonder why the French as a nation are so slim. )Later Laurent would solve this mystery when we reached the Riviera.) I’m not exaggerating about sizes as shopping in clothing stores would soon prove when we shopped in Beaune.

We left Blois early so that we could enjoy the maximum amount of time in Beaune, which is not pronounced bone-ee, thank you again Wil. It’s pronounced bone with a emphasis on the “n” almost bone-nuh, but not quite. As soon as we arrived at 2:00, so therefore too late for lunch, we headed out to a patisserie for baguettes and pastries and then to the information center. On the way we passed Ma Cuisine, a restaurant which had been favorably reviewed. Although we weren’t able to get reservations there, we were able to get a table outside at 9:00 at Le Fleury. This was our celebration of Noni’s birthday and a fantastic meal it was.

First we roamed around the town and found out that many stores are closed on Monday so we decided to return early the next morning (early in France is 10:00) and continue our fruitless search for shoes that wouldn’t require a second mortgage. We did find out about a cooperative of vintners where we could do wine tasting of several vineyards. Beaune is pretty much all about wine, and the wineries in town required payment for an extensive tour of the cellars before tasting. Having had our own private tour at La Grande Maison, we were happy to skip all that and chat with the nice lady at the cooperative. In the Burgundy region, all red wines are Pinot Noirs and all white wines are Chardonnays. We had a great time tasting the differences in the wines where grapes were grown on a hill with lots of rain or little rain orin heavy clay or limestone soil. Just like Napa, the better the wines, the higher the price. We did get a bottle of Chardonnay, ultimately left in Valbonne as none of us wanted to pack it in our bags or carry it on. The hills and vineyards around Beaune are dotted with tiny towns, just a few ancient buildings and a tasting room; we drove through several on a scenic side trip.

Noni’s birthday dinner at Le Fleury was perfect–the food, the ambiance, the temperature, the interesting people at other tables, and the opportunity to watch passersby. Dale was the most adventurous eater, ordering escargot for an entree, followed by mike at a close second with poached eggs in wine sauce. Noni and I stuck to the aubergine (eggplant) tart. While my companions all ordered Boeuf Bournignon (okay I don’t know how to spell it but it has at least two ‘g’s’ in it, I had a fish dish (exquisite). There will be pictures illustrating the perfection of my choice. Dessert also was amazing. I had a chocolate gateau (cake) filled with hot salted caramel sauce with mango sorbet and various fruit coulis (basically smears of things that tasted great). Have I mentioned that the French seem to have dessert with every meal? Understandable when you live in the land of ultimate pastries.

The next morning Noni and I did our part to support the local economy before grabbing a few baguettes and heading to Villeneuve des Avignon and the lavender fields. 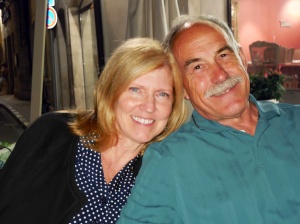 Noni and Dale at Le Fleury