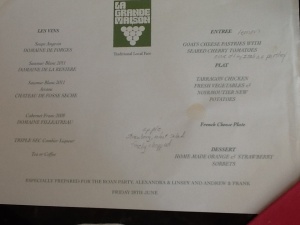 La Grande Maison. My sister had booked this part of our trip months ago and it completely lived up to our hopes (we had learned to let go of expectations…). Micaela and Sue were wonderful hosts, chefs, sommeliers, and local historians. The house itself was built in the late 1600s and owned by the same family who built the chateau in Samur. The son of the family fought in the American Revolution and founded a community in West Virginia that was to have been the place where Marie Antoinette lived in exile. Apparently she tried to escape from Versailles and became lost in the streets and captured before she could escape. A carriage was waiting to take her to the west coast of France to board a ship for America. It’s hard to imagine how that would’ve changed French, and for that matter West Virginia, history.

We arrived fairly late as the trip from Bayeux into the Loire Valley was long and we stayed in Normandy until nearly 3:00 visiting the D-Day sites. From our time in Paris, we had learned to purchase lunch before 2:00 when everything shuts down for a couple of hours. The little cafes have baguettes with a variety of fillings-everything from tuna (thun) to cheese (fromage) to salade (lettuce and tomato) to chicken (poulet). In the areas if food and asking for directions is where my tiny knowledge of French increased (more on that later).

On our arrival we met the four other people staying at La Grande Maison–Allie and Linsey from Sussex, England, and Andrew and Frank from Boston. That night we all enjoyed a fantastic wine pairing dinner of five courses: a sparkling white cocktail with hors d’oeuvres (olive pastry, crudités), an entree if puff pastry with goat cheese and seared cherry tomatoes, a main course of tarragon chicken, fresh vegetables, and new potatoes, a salad and cheese plate that included a pungent bleu cheese to spread on brad and top with local honey (delicious!)’ and dessert of homemade orange and strawberry sorbets. We samples three Samur Blancs, a Cabernet Franc and an exquisite Triple Sec. The only reason I have all this detail is that I saved the placemat with the menu. We really enjoyed the other people staying at the guesthouse and spent time that night and the next two days conversing with them and getting their recommendations.

We should’ve listened to Allie and Linsey who were not enthusiastic about their meal at Le Puys a Vins in the tiny village of Le Puys Notre Dame. Le Puys is some kind of inside French joke about wells. Micaela couldn’t really explain it, maybe because she’s from Britain, maybe because it’s Gallic humor and not that funny… Anyway, What Allie didn’t like was that she and Linsey were the only people in the restaurant that night. Since Micaela highly recommended it, we went to the restaurant for dinner our second night. Very limited menu–only fish, lamb and quail for main courses. I have lots of friends who wouldn’t eat any of those. And we were the only people there besides one other couple. This was a Saturday night. Because French food is so expensive and because portions are small, and in the case of my lamb a tough, inexpensive cut, maybe the restaurant can survive selling a handful of meals each night.

Our first full day in the Loire Valley we shopped at an outdoor market and had a nice lunch in Samur and then drove to 2-3 small villages around the river (I lose track). The Loire is the longest river in France and we crossed it several times as we traveled south. We also went champagne tasting, visited an underground village, saw many churches and a few chateaus (castles) and drove through countless vineyards. Some of that was during our second day–again I lose track…