Too bad I couldn’t upload this yesterday for Independence Day.

“Here rests in honored glory a comrade in arms known but to God.”

Three hours after leaving Paris behind, we drove in to Bayeux (pronounced bay-ooh) and checked into La Tour Louise Guesthouse, the first of several old (1600-1700) guest homes we would stay in. Is it the age of the building (1700s), the stone steps, the old wooden, double sash windows that gives these old structures the ambience and….scent? Because there is a dampness in the walls that holds the heat or cold or smell from cooking. Nevertheless, it was a nice place, with an epic view of the Bayeux Cathedral from (wait for it) the bathroom window! The host was Wil; he explained that in France a guesthouse requires the owner to live on the premises. He also told us how to pronounce the names of the couple of places we were staying: Samur (sam-wah) and Beaune (bone-nee). Both turned out to be wrong….

That evening we drove to the landing beaches of Normandy, which was a great decision as it stays light until 10:00 and because it rained the next day. So we were able to walk on the eerily peaceful beach, past various memorials, German bunkers, and buoys in different colors that indicated where the battalions landed. Even before the invasion on that cold morning of June 6, 1944, three airborne divisions landed by parachute and glider behind the beaches. At 6:30 AM American, British and Canadian forces began history’s greatest amphibious assault. By the end of the day the Americans had secured a fragile hold on the strategically important beach that became know as Omaha Beach. If you’ve ever seen the movie “Saving Private Ryan,” you’ve seen a faithful and haunting reenactment of the fighting on Omaha Beach.
One thing I especially like about the Normandy American Cemetery and Memorial is that the crosses of those who were never identified are mixed in with the other graves. This powerful memorial (172.5 acres) overlooks a D-Day beach and the English Channel. Many more than the 9,387 represented by headstones were once buried here, but 81% of American families chose to bring their loved ones home to a final resting place on US soil. The ones who remain include 41 sets of brothers and 3 Medal of Honor winners. Over 1500 MIAs have a memorial on the grounds of the cemetery where all of their names are listed. Visiting the cemetery evoked the most emotion for me.

We also visited a museum dedicated to the Airborne unit and saw the church where a paratrooper hung for on the steeple for two hours (he had a broken foot) before being taken down. The French have kept an effigy of the paratrooper on the church for many years. There are several museums we didn’t see, but we did enjoy hanging around and soaking up the atmosphere of the villages. It’s clear that the surrounding towns have economies based on the tourists who come to Normandy–souvenir shops, cafes where veterans have signed the walls, and even a British style pub filled with D-Day books and the occasional picture of the town in the 1940s.  But the fish and chips were pretty good…. 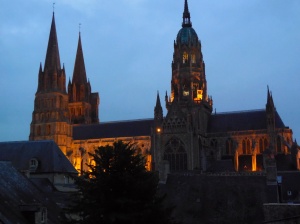